A month or so ago I was a traffic light waiting to turn left. The car in front waited as well. Before the light turned green, it decided to do a left turn through a red light across multiple lanes of traffic.

This car was not turning left “late”. It made a deliberate and calculated decision to turn left on red light. A few moments later the light would turn green allowing the opposing traffic to come across. 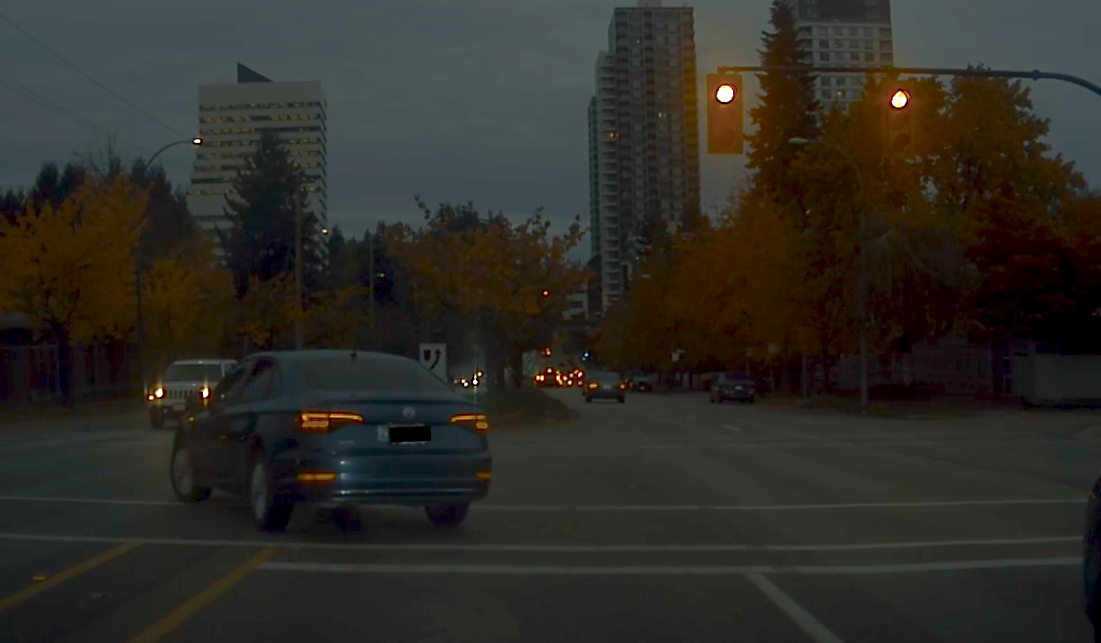 I hit the button on my Tesla and got a full recording on video of the car doing this. When I got home I could see I got the license plate nice and clearly. So at this point I thought, let’s see what it’s like to report a driver… and here’s what happened.

Also this driver has an “N” plate and is a new driver.

Finding where to report

This incident was on Boundary Rd which is the border between Vancouver and Burnaby. The Vancouver police site is not interested.

Turns out the juristiction for Boundary Rd. is actually the Burnaby RCMP, so I went to their website. The Burnaby RCMP website let’s you report something online, yes there’s an option for “Someone was driving poorly”.

But if you have “video surveillance” you can’t report it online. That makes sense.

So you have to phone them. I phoned their non-emergency line and waited over an hour and half. Gave the details and was told I’d be called back.

Getting evidence to the police

An officer phoned me back and said they’d need to see the video and I had to “drop it off”. Alright, if that’s what you want me to do.

So I copy the video to a cheap old USB stick, because that’s the best idea I’ve got and have to drive over to Burnaby RCMP detachment (45 min return drive). They take my USB stick and say that’s it.

One month later I’ve heard nothing from anyone. I phoned Burnaby RCMP and they say I have to contact the constable to get my USB stick back.

The email from the Burnaby RCMP doesn’t work (perhaps I wrote it down wrong), but if I can figure this out then I’ll have to drive back to Burnaby and pick it up (another 45 min return drive).

They won’t tell me if anything happened, if any penalties were assessed because of privacy laws.

This cost me a USB stick and at least three hours. If I’m able to get my USB stick back, it will be closer to four hours.

The fastest and easiest way to get satisfaction is to just post the video on social media. Next time I’ll just do this.

There is a just huge pile of dis-incentives in this system:

There is no incentive to report a dangerous driver. In fact, there are only dis-incentives to report dangerous drivers. It’s pointless, costs you time and money, and you have no idea if anything happens as result.

What we could improve

More and more cars have dashcams and more people have cars and cameras. We have more opportunity to make our roads safer than ever before, but we don’t.

Make it easy to report

The only place that seemed to care about reporting this was the Burnaby RCMP. The Vancouver police and ICBC didn’t allow anything on their website.

It should be easy to do on a website, answer a few questions, and then upload a video. It should take 5 minutes.

Having to “drop off a video” these days is ridiculous. Videos can be uploaded to social media or another number of places.

There are two crucial pieces of feedback that people need:

One: Knowing that drivers are being held accountable and people reporting them helps. This makes people report dangerous driving. Reports can be aggregate to avoid identifying individual drivers.

Two: Feedback such as “that’s not dangerous driving and an offence” and “your video was inadmissable because of x” would help people figure out when to actually submit videos.

If it wants to take part in road safety do you think it should care or help with this? It could collate and help forward information onto the appropriate law enforcement agency.

I went into this knowing that likely nothing would happen. But I was dispirited how hard it was.

It also made me realize how even more ridiculous the “license and register cyclists” argument is. We can’t even hold drivers of 2 ton machines that kill people and the planet responsible.