We know that British Columbia, by way of the Motor Vehicle Act, is not a province that supports cycling. Generally cycling here is one that involves moments of terror and then real terror depending upon the lack of infrastructure you face cycling.

If you cycle the sea to sky you will find this on the road out of Britannia Beach. That’s where the shoulder for cycling goes instantly with no signs or warning down to zero.

Cyclists are forced straight out into traffic. There’s no signs, no warning to cyclists or drivers. It’s on a right hand bend, so you are forced to cycle around the bend in the lane, where cars are doing 90 km/h. That means cars can’t actually see you as they go around the bend. Sheer terror.

At Porteau Cove there are lots of signs and warning to both cyclists and drivers this is happening. Its a less sharp right hand bend and I normally hit this at 40km/h+ on a bike. 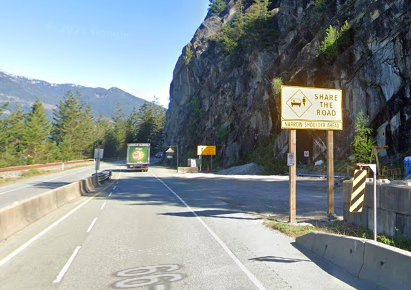 So what does “Share the road” mean? Well because BC has no passing distance, I was cycling through this section at 40km/h a feet or two into the lane when a bus decided to pass me at 80km/h+. I was able to reach out my left arm and hit the bus. That’s how close it was.

How about the Seymour Parkway. There’s a bike lane, great. Highlighted with red arrow (and yes that’s a truck crossing it). Before that there’s no bike lane because: 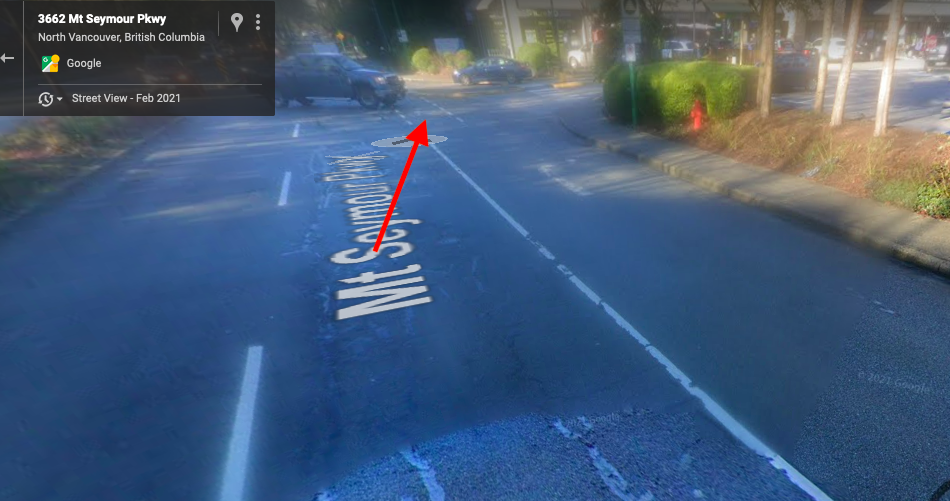 This is a designated ICBC bike route, that ICBC wants to ride to avoid anatagonising drivers (yes, it’s all cyclists fault)… and again you have to swerve out into the road.

There are many moments of terror cycling because cycling infrastructure when it does occur is on a block by block basis and done with the minimal amount of cost and inconvenience to drivers.