Yesterday was my fourth Gran Frondo, the last was in 2017.

The Fondo for me has become the signature event of the year. It’s at the end of the season, as the days get shorter and the evenings draw closer and the rain starts to arrive. The ride provides a nice gauge for how well the training has gone and your level of fitness over the year. Also, since it’s the same ride every year you can compare yourself historically to the ride.

Last year I dropped 17 minutes off my time and that made me really happy. I finished last years post by saying “I’m going to get below 4hr 30min next year”. So that was my goal.

My riding patterns changed too, partly due to a change in jobs from Mozilla to GitHub. That meant I had no office to go to and no daily commute.

So in 2018, I spent less time on the bike, but went father and did longer average rides. There was less time grinding out a commute to and from the office, which whilst good exercise, might not have been good training.

I did Mount Seymour 7 times (only made it 3 times last year). I managed quite a few 100km plus rides: including the 160km Tour De Victoria race, the challenge route of the Ride to Conquer Cancer, 150km up the Sunshine Coast to Savary Island - and 173km back, 132km up to Whistler and then back.

The theory was that those long rides would help, if I can do a race lasting 160km, perhaps a 122km race won’t seem so bad. Also this year I moved up a group at Steed and rode regularly with the group 3 riders, instead of the group 4. That meant longer rides with less stopping.

Over the winter, I took up running and did my first 10km run and that helped me keep my weight under control and hopefully keep some level of cardio ability over the winter so I didn’t have to start all over again.

So yesterday came and I spent a few days before hand excited and not sleeping too well. I realised that I was looking forward to and excited by this ride. Given that my weight loss hadn’t been as much as I wanted and some recent times, I wasn’t expecting to hit my goal of under 4h 30m. I fully expected to be similar to last year, around 4h 45m.

This year I worked my way into the 4.5 hour area instead of starting further back. Turns out this made a difference as I was able to get into a group of people going similar paces and that really helped. It set a good pace and let me do some good drafting.

Weather was mixed on the first half, some rain - there was a big downpour at Porteau Cove and rain Squamish. But I made good time on the first half. This year instead of focusing on hitting time at check points I focused on two statistics, my heart rate and my average time. Last year 4h 45m meant a speed of 25km/hr. Knowing that the hills are in the second half of the course, I tried to get my average speed high but keep my heart rate low so I had something in the tank.

There’s one of the few long flats around Squamish and I got in behind someone pulling along at 38km/hr. That got my average up to 30km/hr and kept my heart rate under control. 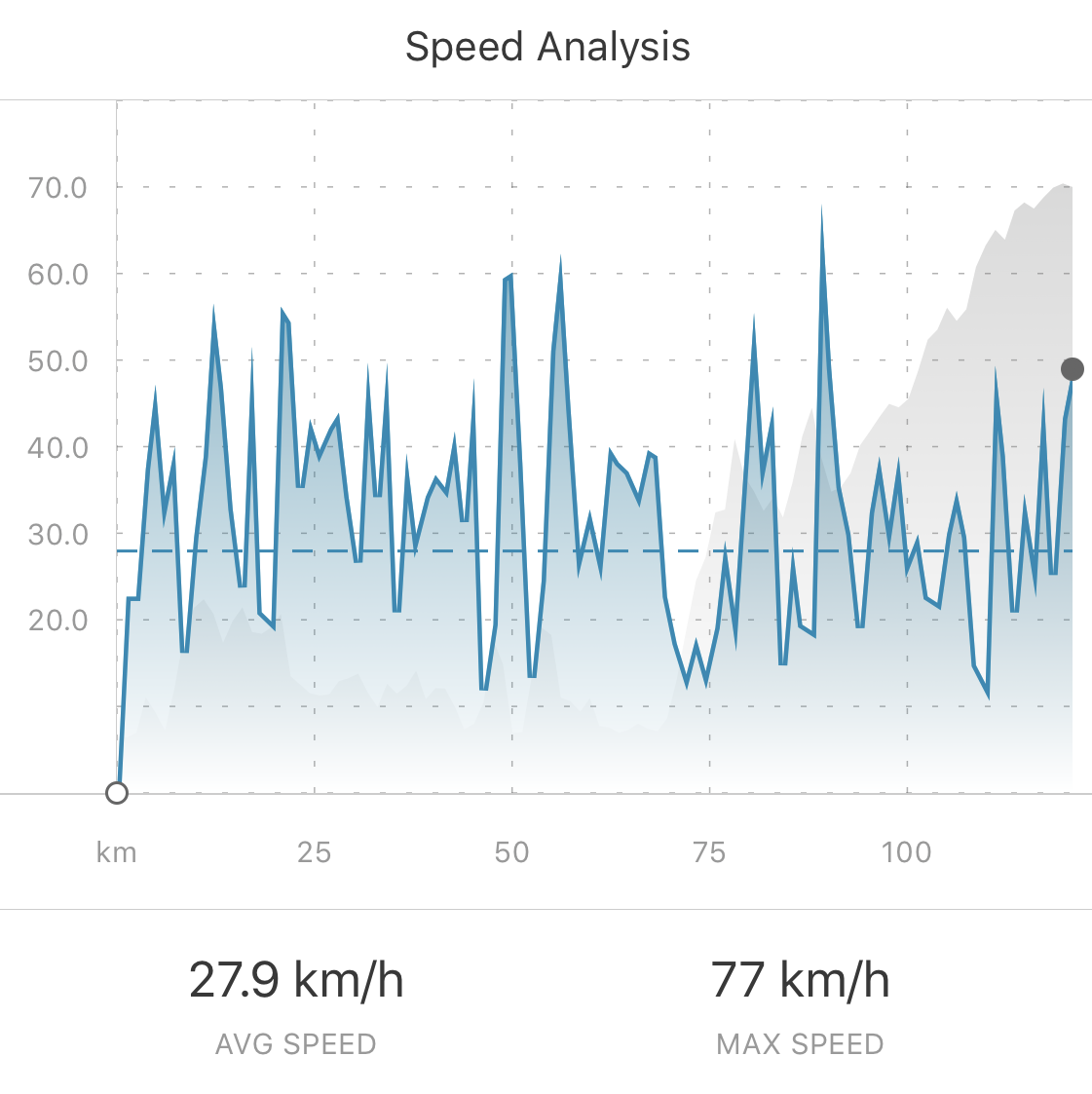 Weather improved after Squamish and was dry from then on. My challenge was to take the hills and keep my average up and it started dropping. But I was determined to keep it up above 25 km/hr. Around Daisy Lake, I got a good draft for a while at 35km/hr pace. But had to keep on racing hard to keep that speed up. You can see the effect this had on my heart rate as it starts to climb. 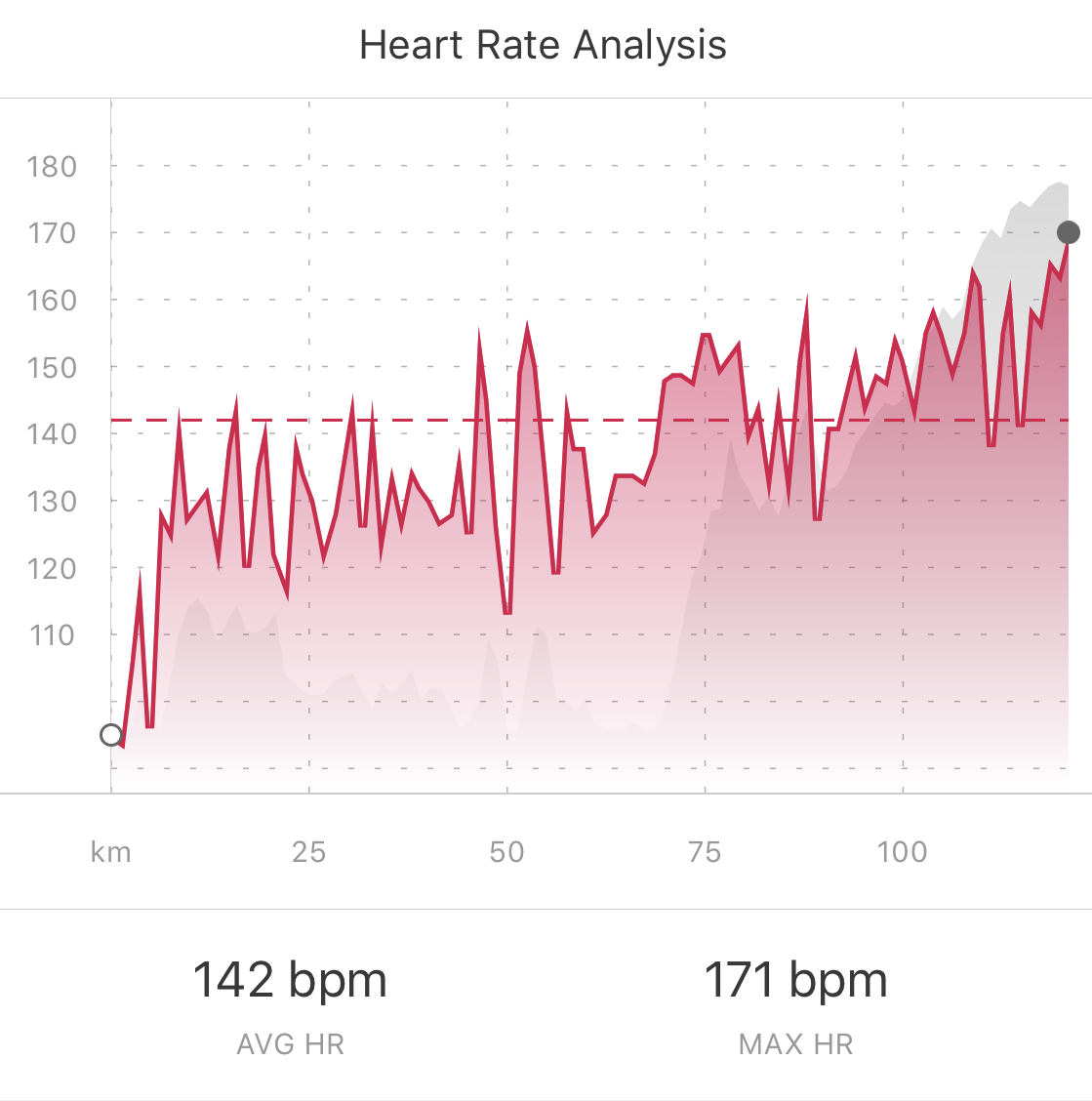 The result? I ended up crossing at 4h 19m. That’s 25 minutes faster than a younger version of me. I was shocked, surprised and so happy and incoherent as I crossed the finish line.

Can’t believe I did it.

I’ve got not idea what goal to set for next year, yes I’ve signed up again.