This year, the parents at Rainbow Preschool decided to honour Lego's 50th birthday by designing and building a Lego float for the festival parade. We got some great deals on materials - 50 worth of astroturf for 15, as many identical boxes as we needed, foam to make trees out of, and card to cover both sides of the big wall for free, plus half the paint was donated as well!

Well, all the hard work paid off, because not only did the kids have a great time, but we also won FIRST PRIZE in our category!!!

Here are a couple of photos - one of the float near completion (I only took photos of the completed float once the kids were on and I can't post them without parents' permission!) and one of Emily, my little Lego doctor. I was so proud of her! She had been less than enthusiastic about being on the float and I'd only managed to convince her to do it a couple of days beforehand, but she let her face be painted and cooperated beautifully. She even waved constantly throughout the entire parade! 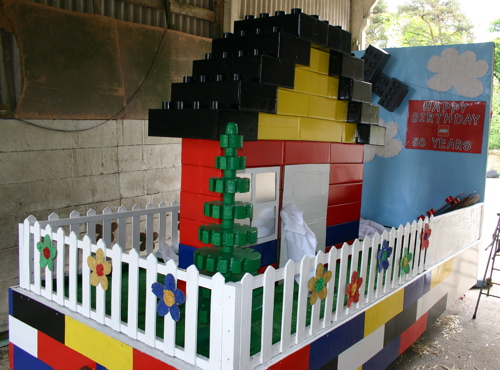