All right, so this first trip is a bit of an odd one in that I wanted to do an overnight or more trip to test everything out. Make sure I liked cycling long distances followed by camping. I wanted to do it locally, but the weather really wasn’t co-operating.

I also wanted to get back home for my marathon so I went to bikepacking.com and picked a route that seemed hard (but maybe doable) but also had a good plan B option if it didn’t work out. So I looked at this one and said “why not?”.

To get to the start of this ride is a multi-day ride. This was an ambitious choice that wasn’t going to work.

A good ride to the Horseshoe bay ferry. Was nice to see friends on the way. Waiting at the ferry for two hours really cooled me down though 😢

On the other side of the ferry, there’s those nice hills in Gibsons to contend with, ugh. The rest of the ride to Sechelt is nice and Porpoise Bay is a beautiful campground with a special bike section. 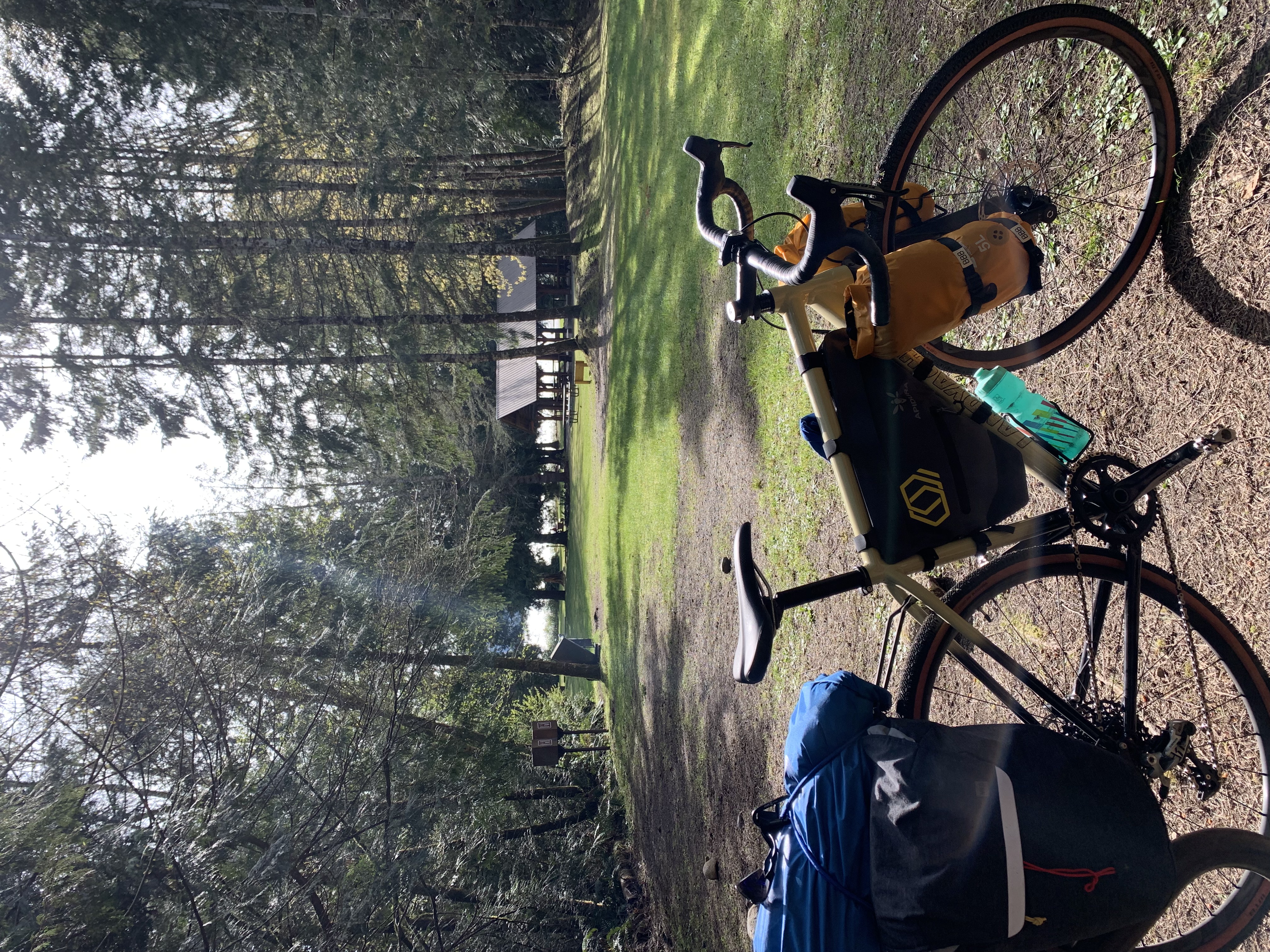 The night was cold, there was a wind warning and the wind was blowing across the campground. Because I wasn’t sure, I just grabbed most things and stuck them in the tent with me, leaving the bike to face the cold on it’s own.

I also put my food in a dry bag up a tree, because they’ve removed all bear proofing equipment from the cycling campground.

Note: missing from Strava is the first 10km that I forgot to record from the campsite.

It rained overnight, but it wasn’t raining when I first woke up. It was just still windy. That meant I could pack up and get on my way easily enough for the misery that was about to come.

As I passed Sechelt, it got really windy. Multiple times I was being blown sideways as the wind howled off the sea. Then it started to rain. Then I realised how much I hate this part of the highway. From Sechelt to Earls Cove it’s continual short steep climbs and descents. I was continually going from low gear to high gear and so on.

By Earls Cove I was cold, wet, battered and tired. I pulled into Earls Cove and had perfect timing straight onto the ferry. Ran upstairs and got a cup of tea to warm up. I was wiped.

Some nice man offered to drive me to Powell River, but I refused.

The other side of the ferry to Powell River is better, there’s a big uphill, some flats and long downhills. It has nice wide shoulders and is easy to maintain a momentum. There was a two hour wait in a warm waiting room at Powell River for the next ferry as the wind and rain lashed down.

It was at this point I made a decision to spend a night in Comox at a hotel and not turn right towards Campbell River and try camping. I realised I was not physically or mentally prepared for the original route, up to Cape Scott, and I went for plan B. I chose this route because I knew I could back out easily if I wanted.

So instead of north, I aimed south and made plans with a friend to stay on Salt Spring island on the way back. Cape Scott and northern Vancouver island will still be there for another time.

This was a wonderful day, great riding in the sun on the quiet coastal road. The road is spectacular and has little traffic. Qualicum Beach and Parksville were lovely. I was aiming for Englishman River falls to get in a bit of gravel.

That trail was fun, but also got into some pretty narrow and steep singletrack that I wasn’t ready for on my heavily loaded bike, I had to walk a bunch of it. Then got to the top and found that the campground was closed. Normally that would be fine, but the water was turned off and it was a long walk to purify some. It was also an extremely mosquito infested campground.

So I cycled back down to Parksville and stayed at the absolutely amazing Rathtrevor Beach campsite. It was so much better and glad I got the ride up the trails and then stayed at an amazing campsite. 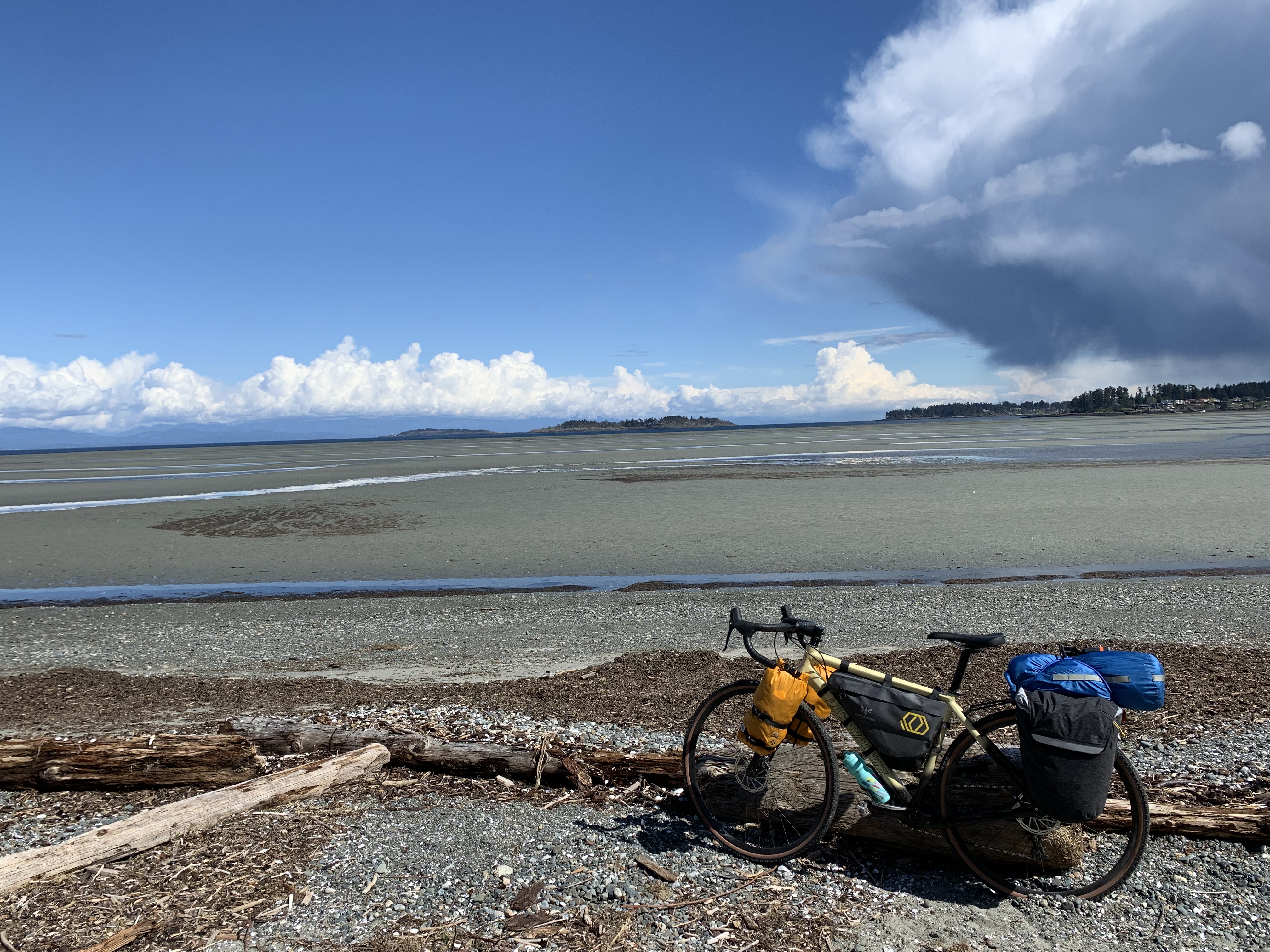 Another lovely day with sun, getting cloudier towards the end, but little rain. This route had its nice bits and it’s ugly parts.

At Nanoose Bay you have to get on the highway for 5km+. Nanaimo center and south was terrible and there was more highway parts there.

But when you get off the highway, again its a lovely ride through rural Vancouver island. Lovely little communities, few cars and long roads. The ferry from Crofton to Salt Spring is short.

I was really starting to notice how tired my legs were getting at this point. It’s easy to look at 100km on a fast unladen road bike and think of doing that in 3-4 hours. It’s harder on a fully laden bike like mine.

At Salt Spring I was greeted by my friend and looked forward to some good chats, beer and food. First I had to cycle up to their house over the ridiculous Salt Spring hills (short and steep).

Note: missing from Strava is the first 11+km that I tried to record, but didn’t. Hey it was 5:00am in the dark.

We decided that the best ferry leaves from Fulford Harbour at 6:20am. So I got up at 5am, put the lights on and road across Salt Spring in the dark. At the ferry I had breakfast and sat on the ferry for 2.5 hours as it worked its way via Pender, Maine and Galiano islands over to Tsawwassen.

The route from Tsawwassen to Deep Cove is mostly miserable and riding along River Road is probably the most dangerous and insane thing to do. Just avoid this if you can, but Tsawwassen is extremely hard to get to by bike.

It didn’t rain, at least, but the cycling infrastructure in parts is just so bad.

BC Ferries are awesome for cyclists. Cheap and you don’t need a reservation. They’ve usually got hot food, or some food. They are great, a real bonus if you are exploring this coast.

A 10 day trip around the North of Vancouver island is going to take some planning and some drops of supplies. I was carrying 5 days of food and couldn’t really carry much more. It’s also going to need better weather.

My legs and body would have failed me if I’d done that route. Turns out going from almost zero cycling to over 439km (this trip), along with 56km the day before plus a 10km running race… tired me out. I came home and did nothing for two days.

Would I recommend this route? I’d avoid doing Salt Spring to Tsawwassen if you can. I wish I’d cycled back to Nanaimo and taken the ferry to Horseshoe Bay. That part of the trip was so bad.

This trip had almost no gravel and was all paved. That’s ok, but I’d like to get more gravel time in if I could.