Day One: Waikoloa to Ocean View

I couldn’t figure out a ride for the first day that was a decent distance, not too short and not too long without making the other days harder. In the end I decided to just go for a long ride. That was probably a bad idea.

It started out wet and rainy with flood warnings. But as I got to Kona it stopped raining. Had a chance to stop at wonderful beach for a snack. 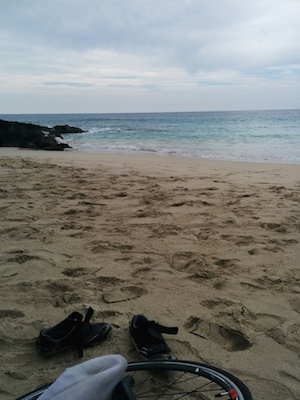 By the afternoon as I was getting near Captain Cook it got hot and I hit the steep hill and that was horrible. It floored me and I struggled at the end. Had to seriously recuperate at the top.

The views past Captain Cook of the island stretching out was fabulous and then next 30km cruised by.

But after 90km I started to hit a wall and slowed down and took frequent breaks. Arriving at Ocean View at 4pm, I was absolutely exhausted and dehydrated. Add in jet lag and it was quite a day. 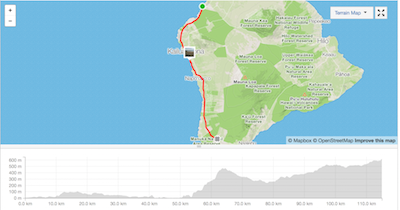 I figured out I’d strained my achilles yesterday. It was raining. Really raining. There were flash flood warnings and the road was about to be closed. But my plan was to get Volcano. So I did.

The first hour or two were the worst, heavy pounding rain that formed rivers on the road. Brakes basically became useless and visibility was terrible. And my ankle hurt. 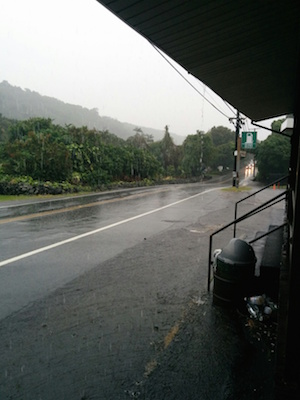 After about 2 hours I got to a police road block, due to flooding they were about to shut the road. They said “well you can probably make it” through a deep puddle stretching the road. So I did, while cars were turning back.

It let up a bit, but it did not stop for 6 hours and as I climbed above 2,500ft in elevation it started to get colder. This was a long day. 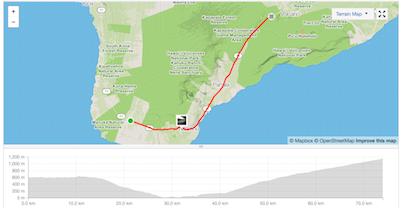 Short ride downhill into Hilo and then a rest day. I needed that to get some drugs, a support strap for my ankle and some relaxation. Oh and it rained insanely hard all my ride, so this was a chance to dry out my clothes. 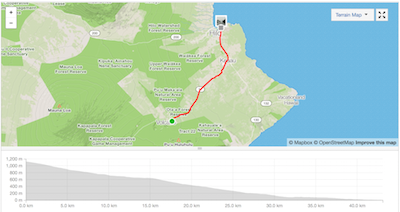 Hands down the best day. After my rest I was feeling better and the support strap was helping my ankle. I left Hilo early in the morning and rode along the sea front. The road winds over gulchs, waterfalls and has fabulous views. After 60km+ it turns left and climbs up the volcano towards Waimea. 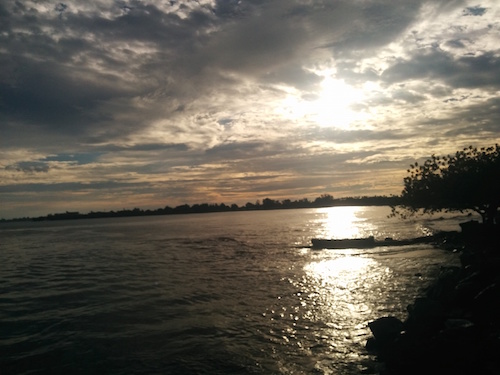 What was then a fabulous ride become more better as it went to a winding back road past farms lined with trees. After a climb you break out of the trees into wide green fields with the snowcapped volcanoes towering in the distance. Just amazing.

As it turns out, for me right now about 90km is just about the right distance for me. 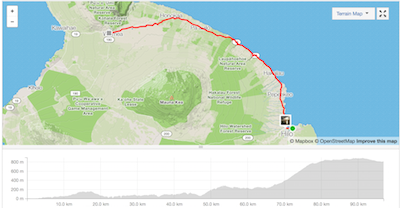 You could do this straight downhill to Waikoloa (25km), but that would be boring. So instead I looped up to Hawi. Boy was I glad I did, this was another highlight. A nice climb up a hill with fabulous views across Hawaii. Followed by a wonderful roller coaster of slow downhill past lovely tree lined roads, views of Maui in the distance. A wonderful last day. 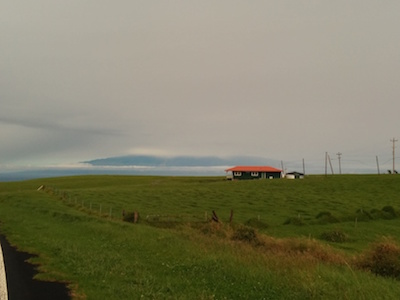 The remaining 40km back around to Waikoloa was boring and tiring. 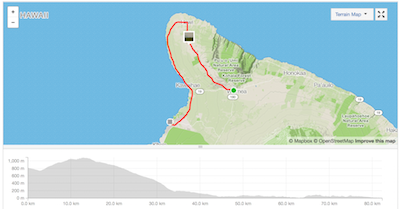 And that’s it. Five days, over 427km, around two volcanoes, one really sore achilles tendon and one flash flood. Would do again.

Thanks to Mozilla for being crazy enough to run a company meeting in Hawaii.