Why isn't government open by default? 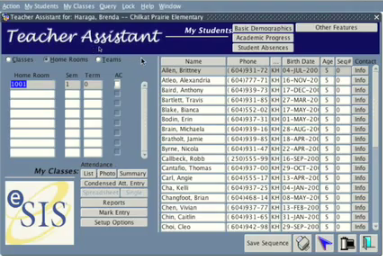 A few weeks ago the government published a report on an $80 million (or thereabouts) project for the BC Ministry of Education on BCeSIS. The report recommends that will have to be scrapped in the coming years and replaced after about six years, with a new off the shelf proprietary system.

Some of the things that interested me in the report:

Although some attempts have been initiated to develop K-12 Open Source SIS solutions, there does not appear to be any formal, structured funding mechanism and approach to designing and developing a solution which would meet the future needs of the BC education sector, nor to scale to the extent required to provide a single, province-wide student database.

Damn open source can a pain like that without "formal, structured funding mechanisms".

The UI is mentioned as:

I added a screenshot from this video to see how bad the UI is. True enterprise consulting software at it's best, $16 million eh?

Continuing with BCeSIS and evolving and supporting the BCeSIS solution
a. Acquiring the source code for eSIS

That's right folks. BC spent $16 million and then $11 million on it a year. But it does not own the source to the project.

That probably doesn't surprise many people, I bet it's quite common. For me, on almost all projects I've worked on or managed, the subject of who owns the code has come up quickly in the process. The answers vary, but it's normally something like a non-exclusive license on both ends. I.e. as a developer I can re-use libraries I built of out it and as the client you can do what you like with it.

I do remember one meeting with a large government and business clients and I brought up the license to the code and was shot down quickly "of course the client owns the code". Silly me.

What if BCeSIS was open source?

Why would have BC not have asked the consulting company not to develop this as open source software from the get go? Let's just imagine if BCeSIS had been developed as open source.

If it was open source, BCeSIS might just be moving forward as other jurisdictions might have picked it up. It might be cheaper and easier to maintain. It won't be any worse.

Why isn't the government open source by default?

Let's just play devils advocate here and see why a large project wouldn't do open source. And by open source, we mean the software developed for a project like BCeSIS. You can still have an open source project and use Oracle.

The conclusion from the report is that there a few vendors who can provide and off the shelf solution and it will be backed by Oracle, Microsoft or Java technology. I bet it won't be open source code.

It's not a simple "I can throw that together using Rails for 5k on a weekend" project. It could be accomplished with an open source software stack and it could be done with all the code being open source. And that would present a much brighter future for the software and for the poor teachers and admininstrators who have to suffer it.

The brief informal poll of exactly one teacher, my wife, when I told her of the scrapping of BCeSIS was "woohoo, it sucks". I hope the new one is better.

Update: how to change your password. Must be 8-14 chars, numbers, letters, one of $, # or _ and must start with a letter or number. Lovely.