The right plan for my phone

Almost three years ago we came back to Canada and the next day went to a Rogers store and bought two iPhones. If you've done this in Canada, you have probably had to face the horror of a three year contract, I was upset about it, but there was no choice. My contract is now coming up.

Why won't I just renew with Rogers? a) a three year contract, b) much more expensive, c) rogers will nickel and dime you for everything (evening calls start at 9pm, you have to pay extra for visual voice mail etc), d) rogers will call you the day after your bill is paid demanding credit card payment right then. Oh and a three year contract that stacks everything in Rogers favour. Love it.

I spend more on Rogers than almost on any other service, but I never get offered anything from Rogers. No ongoing incentives, points or rewards. Apart from complaining about my bill payments, Rogers has not given me any love. Ever. Until yesterday, when a letter arrived, asking me to sign up for another three years. Not likely.

But to give Rogers credit over AT+T, the actual network is pretty good here in Vancouver.

And how times have changed. iPhones are unlocked now, so I can take a new iPhone to any network. Or use an Android and get the Firefox goodness. All I want is a plan, nothing else.

So here's my criteria: 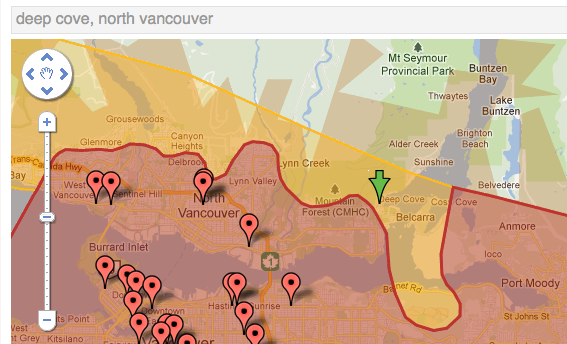 Oops no coverage at my house. That's a deal breaker.

The $50 a month could work, but I can't buy it without adding a device. Then devices all require a three year contract. Forget it Telus.

Prepaid could work, but I'm not paying per text and it doesn't include data. All other rate plans require buying a phone. They can come free with a three year contract and you pay more for the phone if you want less of a contract. Forget it Bell.

The site is a little confusing. But it looks like for $55 a month I can get voice, unlimited data, texts. Add my wife to the same plan and that's $5 off. The site is short on specifics, so I need to go to a store to ask more. No details on contract lengths though. But looks promising, anyone use them in Vancouver?

Essentially Telus, so the network will be good. Plans sound good. With no contract I can get 2gig of data and a decent calling plan for $55 a month and there are cheaper options. I can't buy the plan on their site without buying a phone with a plan. But they advertise switching to Koodo, surely I must be able to just transfer my phone.

Fido: they are just Rogers. Clearnet: no data plans.