Google tries to get smart 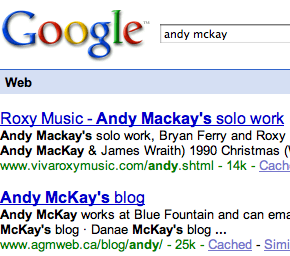 Thinking about Jon Udell having a higher Google ranking than Jon Stewart (which I just helped) I checked how Andy is doing these days. Sadly I don't figure at all in the ranking for Andy, I think a few years ago I got on the front page.

But I've always been able to hold down Andy McKay top spot. Although there's some good prof's out there giving me good battering. But now I'm being beaten by Andy MacKay, because Google is being smart and inserting an extra a in there.

He's a worthy winner and it's going to take a bit to knock him off. But now I have to compete against McKay and MacKay's hey that's not fair. Fortunately it doesn't really matter that much :).