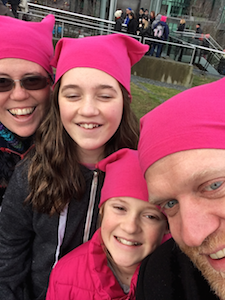 Last week we went on the Womens March in Vancouver. This was the second political demonstration of my life.

What’s happening in the US with Trump is terrible and because the US is so large economically and politically it’s having a huge reverberation around the world. Including Canada.

I want to send a message that it’s not OK to Canadian politicians. That some of the people running for the Conservative Party of Canada that we won’t tolerate this kind of behaviour. That setting up a “barbaric cultural practices” hotline is just capitalizing on racism. That screening for “Canadian values”” is the opposite of Canadian values. That silencing scientists is not something a free and open democracy shoud do.

Like many people I was just stunned when the US election was announced. I decided after that it was time to do something to stop anything like that happening in Canada. If we ever get to a point where the actual policies and truth don’t matter, we’ll be sliding down a horrible path. So I joined a political party and promised myself that I need to do more.