I wanted to look at some numbers from the teachers conflict.

The BCPSEA is essentially a pay cut over the next 6 years, since the cost of living increases are likely to be over that increase in salary. But I was interested in how that compares to what has happened in the last 13 years. Because we can all see how greedy the teachers are. According to the Fraser Institute:

They signed a generous collective agreement in 2006 that gave them average wage increases of 2.5 per cent over five years,

Oh so, so generous. Let’s just look at that.

As far as I can tell this is the salary increase and inflation increase each year since 2000:

Let’s put that in some pretty graphs. If a teacher started on $30k salary and got no promotions or increase or salary from any other source: 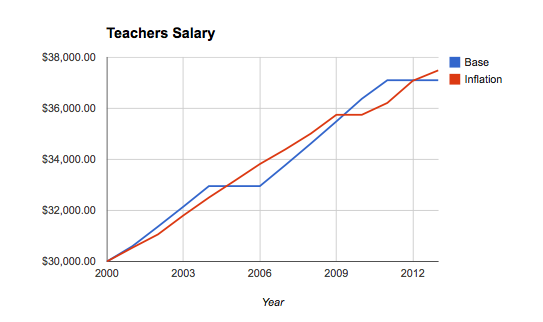 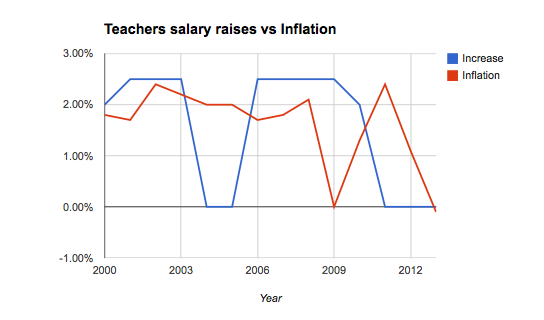 Basically teachers are barely keeping up with inflation. When contracts get negotiated, they get slightly above inflation. Then there are years without a change. As you can see the raises aren’t huge and over the long term just about track inflation.

A headline figure like “13.5% over 4 years” grabs the headlines and makes the teachers sound greedy, but its just not true.

Can we just get teachers salaries pegged with cost of living increases and get that out of the way and move on to the other stuff?